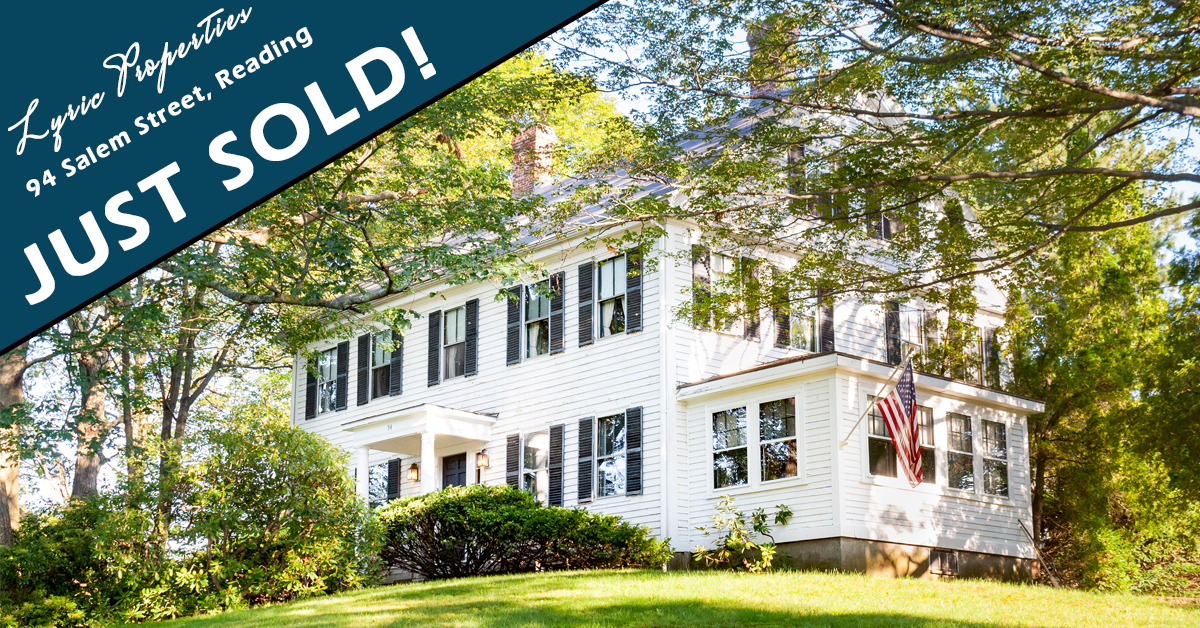 Frederick Van Magness, Jr. and Meredith Landrum are pleased to announce that Lyric Properties JUST SOLD its listing at 94 Salem Street in Reading, Mass. (MLS#72008435) for a sale price of $732,500.

"We're thrilled for the buyers and sellers of this home, and we congratulate everyone involved in the transaction," said Frederick Van Magness, Jr., Broker.

According to Van Magness, the sale price of this property ranks it in the top-20 single family home sales in Reading so far in 2018.

"There was so much for buyers to like about this property," said Van Magness. "Built in the late 1700's, this Colonial had features like wide-plank floors, eight fireplaces, and interior shutters that are not seen in many modern homes. It had a very stately appearance outside, situated at the top of a hill on a corner lot near the center of town. We had lots of interest in the property along the way."

Are you interested in buying or selling property in Reading? If so, give Fred Van Magness and Meredith Landrum a call at (978) 494-4450, or contact us here.

This year's highlighted hue introduces the new trend of what the paint company is describing as nostalgic mid-tones.
View on Facebook
· Share

We're proud to share news of our latest sale... 444 Salem Street in North Andover, SOLD for $690,000. Congratulations to the new owners, and to our clients who sold this lovely home.If you're considering a move, make sure your first move is to call Lyric Properties. We can help you achieve your dreams! ... See MoreSee Less

Sometimes it's just a matter of turning a decorating "don't" into a "do" to make close quarters feel a whole lot bigger. Here, top designers and HGTV stars share their favorite insider tricks.
View on Facebook
· Share

In June 2021, month-over-month existing-homes sales were unchanged in the South but rose in the other three major regions of the U.S., and all four regions saw double-digit year-over-year gains.
View on Facebook
· Share

You're house hunting, and you notice a home has been on the market for weeks or even months. Is it a dud? Should you stay away? Not necessarily. There could be several factors at play. This article describes a few possibilities. ... See MoreSee Less

It’s a seller’s market, which means there are some properties that take longer to upload in the MLS than it does to sell them. Then there are a select few homes that linger on the market for months. If you’re a buyer and feel intimidated by the pressure to act quickly, or simply don’t have t...
View on Facebook
· Share