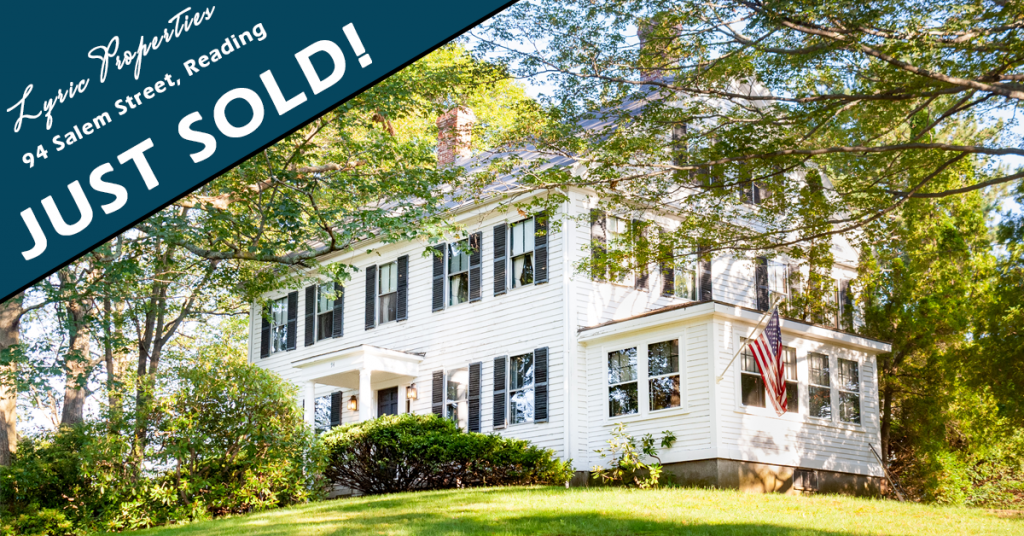 Frederick Van Magness, Jr. and Meredith Landrum are pleased to announce that Lyric Properties JUST SOLD its listing at 94 Salem Street in Reading, Mass. (MLS#72008435) for a sale price of $732,500.

"We're thrilled for the buyers and sellers of this home, and we congratulate everyone involved in the transaction," said Frederick Van Magness, Jr., Broker.

According to Van Magness, the sale price of this property ranks it in the top-20 single family home sales in Reading so far in 2018.

"There was so much for buyers to like about this property," said Van Magness. "Built in the late 1700's, this Colonial had features like wide-plank floors, eight fireplaces, and interior shutters that are not seen in many modern homes. It had a very stately appearance outside, situated at the top of a hill on a corner lot near the center of town. We had lots of interest in the property along the way."

Are you interested in buying or selling property in Reading? If so, give Fred Van Magness and Meredith Landrum a call at (978) 494-4450, or contact us here.

The talk of the housing market these days is all about mortgage rates. What does it mean for you if you're considering buying or selling your home sometime soon? Read our latest post.... ... See MoreSee Less

What do rising rates mean for the housing market?

This trend is suddenly popping up in all of my interior design magazines. Apparently, "conversation pits" are making a reappearance. Ever experience one? What do you think of them? (I think I'd constantly be warning guests to "watch your step!" 😂) ... See MoreSee Less

The Groovy Return of Conversation Pits

A midcentury design staple, sunken living rooms are making a comeback. Here’s what to know about these recessed rooms.
View on Facebook
· Share

A positive headline for your Friday afternoon! ... See MoreSee Less

National trends show single-family home sales down during the month of December 2022: www.nar.realtor/newsroom/existing-home-sales-receded-1-5-in-decemberBut, what about locally? Well... Haverhill, MA followed the national trend year-to-year, in that the number of homes sold in December 2021 was almost twice the number of homes sold this past December. However, Haverhill beat the national trend in that home sales were actually up from November 2022 to December 2022, and prices were up about 9% during that period. Good news for sellers locally! ... See MoreSee Less

Existing-home sales retreated for the eleventh consecutive much in December 2022, with three of the four U.S. regions recording month-over-month drops.
View on Facebook
· Share

Wishing you and your family Happy Holidays! ... See MoreSee Less